Subject to whatever terms might be reached under the Workplace Relations Commission, the funding will be allocated from the Department of Social Protection and the final pay settlement will be brought back to Government for final consideration and approval.

I have been pushing consistently with government colleagues for improved conditions for Community Employment, TUS and RSS supervisors and assistant supervisors for some time now

“I strongly welcome the Cabinet decision that funding will be allocated to support any pay agreement that may be agreed at the Workplace Relations Commission for Community Employment Supervisors. These important community workers supervise in the delivery of the CE, Tús, RSS and Jobs Initiative which all provide vital services to local communities often in disadvantaged areas, services such as the delivery of meals to older people, assisting in childcare provision and general environmental work to keep our towns and villages maintained.

“Obviously an agreement must be negotiated in the first instance but I warmly welcome the decision that, subject to the terms and conditions of any such agreement and the approval of the Department of Public Expenditure and Reform, the Department of Social Protection will be in place to support any agreement reached.” he concluded.

The Community Employment programme is delivered by over 840 individual scheme sponsor companies nation-wide – providing vital services to local communities often in disadvantaged areas, services such as the delivery of meals to older people, assisting in childcare provision and general environmental work to keep our towns and villages maintained. The Tús and RSS schemes are delivered via the network of local development companies, with the supervisors and participants engaging in providing important services to local communities.

At present, there are over 20,000 places  on Community Employment, with a further 5,500 provided on Tús and 3,350 on the Rural Social Scheme (RSS). Currently, there are almost 27,000 participants on these schemes, with a further 420 workers remaining on the Jobs Initiative (JI) scheme. 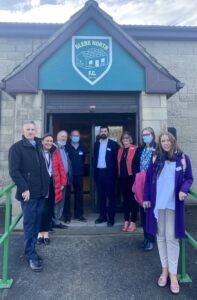