The National Report for Street Feast 2022 has been launched, detailing another successful year for the Neighbourhood Network initiative. 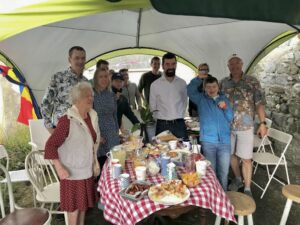 Established in 2010, it has grown steadily over the years. This year 968 Street Feast events were held nationwide and an estimated 89,056 people took part.

“Street Feast is always a great community day but in 2022 it played an even bigger role in helping solidify peoples connections to their local communities. Getting out after the two years we had was a big deal.

Just sitting down, chatting, having something to eat – it sounds very simple but the power of it is extraordinary for the individual; for that sense of community… to stave off all the things that have been challenging people, like isolation and mental health.

When you feel part of a community those challenges are easier to manage – you can keep them at bay. Street Feast is a fantastic way to create that sense of community and the fact that almost 90,000 people took part is a testament to how valued this day is in our communities across the country”

“This year I was priviledged to attend a number of Street Feasts in my own constituency of Fingal. The atmosphere created simply by the power of bringing people together was electric in Skerries and Balbriggan and I look forward to attending more in 2023.”